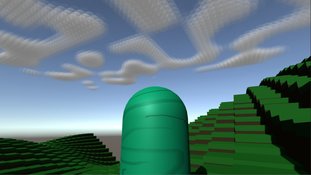 That time of the year again. Thankfully I'm still welcome back to Abertay and so I was able to get hold of a ticket as they're in high demand. Spread out across two floors, this year was even bigger than the last - teams were everywhere. Sadly too many to be able to budget in free pizza! However it was fantastic to see both a diverse set of students and also students from second and even first year. It's definitely important to be making games in your spare time, not only to help you learn but just from the experience you can gain from it. I wish I'd been more proactive earlier on at University. Fortunately I've not done too bad for myself currently.
This year's theme was "Ritual". I've since joined the Dundee Astronomical Society who meet during the winter months at the local observatory on alternating Fridays. This Friday there was a talk about the Gaia mission which I was keen to see. I managed to stay at Abertay long enough to hear the theme (along with the bizarre opening video) before shooting off for the talk.
During the talk, I was mulling over what I could do for the jam. It's often advised to come up with an idea and then throw it away and repeat that about 5 times to try to burn through the crappy, cliché ideas that you might first think up. I was however fixated on my first idea. I wanted to create a game based around performing a ritual to ask a God for help, and I wanted the ritual to change based on variant factors about the world. This was in part inspired by what I loved about the game Keep talking and nobody explodes which has a great asynchronous local multiplayer aspect. I wanted to have two different types of players, ones who would be controlling characters and doing tasks, and others who would possess the knowledge for how to perform the rituals.
I wanted it to be based of older spiritual rituals which were based on observations of the surrounding environment. I started thinking about what such variables there could be. An obvious one was the season, as they are visually different. Another thing I was eager to have was different phases of the Moon, brought about by how I was now quite aware of the Moon and it's phases (once you're aware of it, it's surprising how fast the moon goes through them). I also had an idea to have the planets and, based on their positions, change the ritual. However this latter variable was dropped as I began to realise this was another case where I'd been over ambitious. I similarly wanted an accurate star skybox. I was surprised to learn that there was not freely accessible skybox - only randomly generated ones! I then realised that it would take a really long time to place all the stars. Fortunately my girlfriend stepped in to take off the art load by doing the stars for me. Another variable that I put in was whether the players were in the Northern or Southern hemisphere. This was brought about partially as a "fuck you" to all the irritable flat-earthers who were suddenly surfacing on social media. Of course, if you are in the Southern hemisphere, you cannot see the Northern stars, like Polaris. Similarly, the sky appears to be upside down, for someone from the Northern hemisphere.
I managed to get a surprising amount of these in and ended up with a day/night cycle that I was really pleased with. However the actual rituals were only 3 buttons and so the actual amount of gameplay that I ended up with wasn't much. Similarly, I could only manage to create a ritual for bringing about the rain, which just made clouds spawn, although I was surprised by how pleasing the clouds lucked given they took about 5 minutes to make (the picture on the right).
I believed my game to be pretty niche and perhaps too complicated, but the feedback I've received has been almost unanimously positive, much to my surprise. Similarly, when I've talked about where I would like to take the game, people seem to support the ideas which has encouraged me to indeed continue with the game.
The Global game jam submission can be found here.

I took part in the 48 hour Global Game Jam. Working mainly on my own, with help developing the concept as well as some of the 2D art with an Artist.
​