During the summer between finishing my Honours course and moving onto my Masters, I wanted to try to carry on improving myself. I'd made great leaps over the course of my Honours year but I still wasn't satisfied with my skills. One of the ways I wanted to improve was to take on a game project. This would have ideally been during the Dare to be Digital competition but my team unfortunately didn't manage to get in. However, the designer for the team put me in contact with a friend of his who wanted to work on a game over the summer.
The game idea was that you control paper planes through simple controls to collect stars and fly through hoops to speed yourself up. The game we had at the end of summer was quite a bit different, but I guess that's just how it is with games, you can't foresee everything there is to know about a game until you start making it.
We initially started off with a 9 week plan. However we later decided to coincide with Dare to be Digital so that we could participate with the Indie Fest, which was part of Protoplay, a games development fair. This meant we'd have to work harder to get something worth showing.
The game actually went through 5 different control schemes. The initial plan was for the plane to use a waypoint Unity asset that the designer had acquired. This system however was quite limiting. It meant it wouldn't be possible to leave the defined path (without losing sync with the tween). I tried to compensate for this by adjusting the tween speed based on the dot product between the path forward vector and the plane's forward vector. This appeared to work until I realised that once the tween passes a node, it won't return to the last section of the path and so the sync issue persisted. I managed to convince the designer to change the input. He still didn't want full control of the plane's elevation and so instead I introduced a diving mechanic. The player could dip the plan down to pick up speed and it would then level out. We could then also have vents to lift the player back up. This worked well and once I added the sound that our audio guy gave us and adjust the volume and pitch based on the plane speed, the diving was really awesome. However, as development went on, the designer remained dissatisfied and requested we returned to a simpler input system. We managed to settle on a control method similar to Audiosurf. Using his waypoint system, the player would always be on the path, but could strafe to the side. This changed the way the levels would be set out but was a good compromise of simple controls and actually being playable.
We soon realised however, that this method limited how sharply the plane could turn, because it was difficult to know whether you were lined up with the objects you wanted to get. This was a big problem as the player needed to feel like they were flying in the air. We came up with a solution where we break up the gameplay with little cut scenes. In these scenes, we're free to let the plane do what ever it pleases before returning back to gameplay. In these sequences, I provided a tool to add triggers that would tell the plane how much to spin, how fast to go etc. I also had the camera adjust it's zoom similar to an "action camera". This got us very excited because it looked great, and the level designer was able to effectively use my tool and created some truly impressive manoeuvres. At the time however, I had it that the camera flew to a single pivot which limited it to a single cutscene per level. When I added the functionality to have multiple pivots it looked better. When the plane flew through a "start cutscene" gate, it flies to a pivot #n and then the next time it would fly to pivot #n+1. We realised we could disable the renderer for a "start cutscene" gate which meant we could have multiple angles within a single cutscene, this made them much more dynamic and even better to see.
We got to the end of our 7 week stint and we were pleased with what we'd managed. Along came Indie Fest and we were ready to show it off.

After the high of Indie Fest, the chatter amongst the team died down and unfortunately, we didn't go through with our plans to carry on working with the game through to a release for the rest of the summer. However it was rejuvenated when we were nominated and then won the TIGA 2013 best student game award. This was such an amazing thing to receive and helped spark our enthusiasm again for the game. We continued to work on it during University, even though we all already had a ridiculous amount of work to be doing. This work wasn't in vain however as we went on to compete and then win the games category of Microsoft's Imagine cup 2014 UK final. 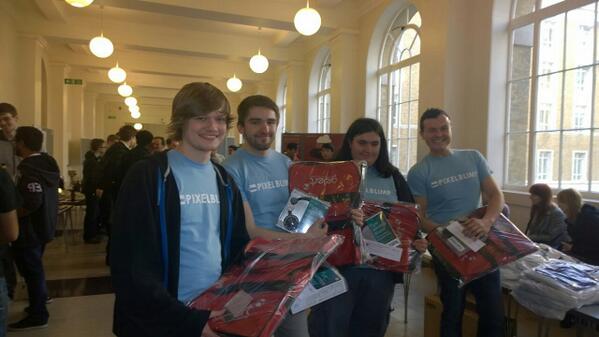 I got together with a designer, two artists and an audio producer to create a game using Unity3D for tablet devices. The development spanned 7 weeks, at which point we demonstrated our game to over 10,000 people at Dundee's Indie Festival. The game received critical praise from the public and went on to win the Tiga 2013 best student game award and the games category of Microsoft's Imagine cup 2014 UK final.